i know this guy 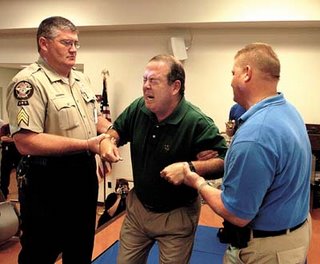 No, it’s not a police bust. This is Georgia State Senator John Douglas — getting shot by a taser gun. From the look on his face, I’ve already decided to avoid getting tasered any time soon.

COVINGTON — State Sen. John Douglas had a shocking Friday morning.
Douglas found himself on the business end of a Taser gun fired by a captain with
the Newton County Sheriff’s Office.

But there’s no need to scour the paper for the legislator’s mug shot: It
was a voluntary act — Douglas’ way of showing local law enforcement officers
that he supports their work.

Sheriff Joe Nichols said authorities who carry Tasers are first required to
be Tasered themselves so they know what the experience is like.

“I’ve made it a point in my public career to be a champion of public
safety. … I feel like you have to lead from out front, you can’t lead from
behind,” Douglas said.

So, before a throng of law enforcement personnel during a Friday morning
training session, Douglas got zapped. Rather than penetrating his skin with the
taser prongs, Capt. Mark Thomas used a training device that was clipped to
Douglas’ shirt to fire a low-voltage shot.

Though the pain lasted only seconds, Douglas said the shock’s effects took
a while to get over.

“The actual feeling was like waves of electricity going through your body.
It only lasts a few seconds and it doesn’t leave any pain, but it did leave me
kind of washed out and lethargic. If you had to give that two or three times to
somebody trying to get away from police, I can’t imagine. I can only attribute
that to being hard-headed, because it got my attention the first time out,” he
said.

A Taser is a weapon that delivers an electric shock and is used by law
enforcment to disable a suspect without resorting to lethal force.

Douglas said he thinks Tasers are good tools for law enforcement, adding
that the devices have saved lives of officers and suspects. “Not letting
them use Tasers is like tying one hand behind their back and telling them to do
their job anyway,” he said.