By KenNovember 28, 2005General
No Comments

On December 18, LifePoint will be hosting our first “Live at the LifePoint Cafe.” It’s a time to bring in local artist and fire up the coffee. I’m really excited (stoked, possibly) to announce our two artists. Both have become friends of mine and I appreciate their giftedness and how they approach their craft.

Michael Tiernan. This guy almost became a Catholic priest! His music is insightful, catchy, and good. He plays a mean guitar, too. He has been named the Male Singer – Songwriter of the Year by the Los Angeles Music Awards for the past two years in a row. For those of you who received a LifePoint enhanced CD during our pre-launch days, it was Michael’s song “The Track” that was used as background music.

Will Edwards. Will was our first featured artist and appeared at our Grand Opening. He’s the only person I’ve ever met who was born in Zimbabwe. I guess that makes him a Zimbabwian or Zimbabwican. His recent album was nominated as one of the best acoustic albums at the San Diego Music Awards. In addition to his music, Will is also a good web developer as well. 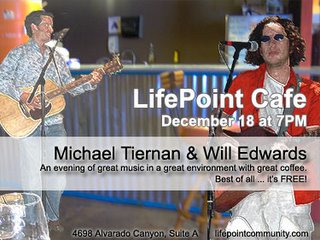